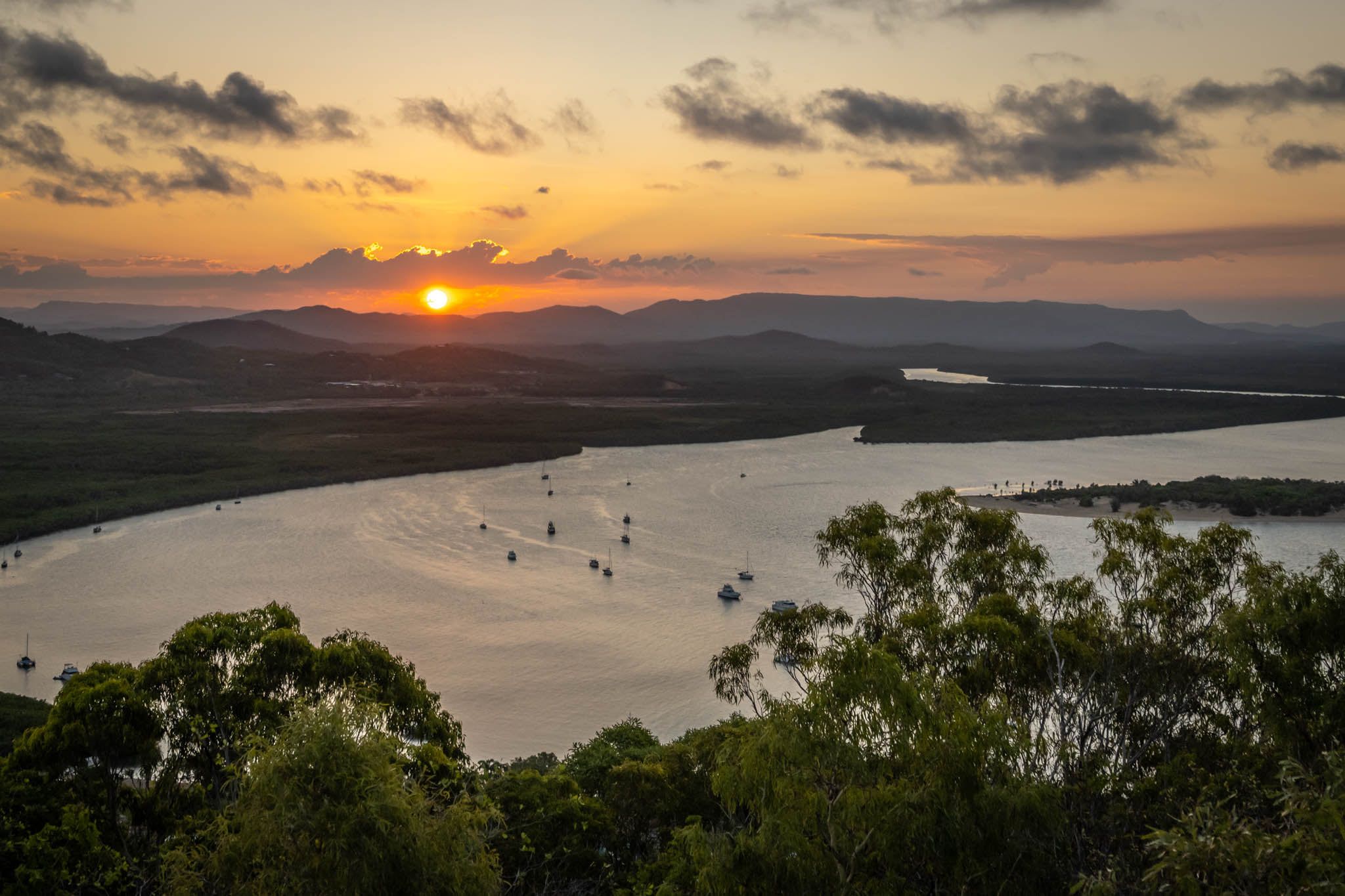 Written by Lauren Farnham on May 31, 2021. Posted in Photography, Travel. Leave a Comment

Going up to Cape Tribulation and Cooktown had a LOT of discussion around it for weeks leading up to it. Lauren well and truly had her heart set on going to both, but I wasn’t as convinced. I knew the road up to Cape Tribulation was average for towing a van as big and heavy as ours (our Expanda is a 20ft van, so around 27ft actual length and we are almost at 3.2T), and then we couldn’t continue onto Cooktown with the van. It had to be left at Cape Trib, load up the cruiser to do the Bloomfield Track, then get a cabin for the night in Cooktown. All up, it was looking like an expensive week! We thought about just doing two days at Cape Trib, leave the van at Mossman and stay in a cabin, but then the cost would blow out even more if we did that and also got a cabin in Cooktown.

By chance when we were camped at Babinda Boulders we ran into a family who was heading back from Cape York and had also been up to Cape Trib (they towed their 17ft van through the Bloomfield Track!) And he assured me that Cape Trib is no problem for the van. So we booked a van site at the Daintree Rainforest Village for three nights, then their storage space for 2 nights while we went to Cooktown and booked a cabin there, then booked to stay back at the village for one, then back across the ferry the next day. Busy few days!

I was still just a little anxious about towing up to Cape Trib and the excitement started right from the ferry. A tip that no one mentioned, was to go across at a high tide. When it’s low it’s quite an angle coming off the ferry, especially for a longer van, even though ours is the outback model so lifted fairly high. We unknowingly turned up at low tide and the 50mm tow ball that I’ve been meaning to change for a DO35 hitch, clunked and banged as we drove onto the ferry. The exit was even more eventful as we watched the motorhome in front of us catch his rear bar on the ferry on the way off.  When it was our turn, the operator guided me to go hard right, then cut back left to get a better angle. It was looking pretty good until the bolts for the bike rack on the very rear picked up some of the timber boards and tore into them. As we went up the ramp onto the road, I could see the operator trying to kick it back down. Surely it happens often and it’s why they’re made of timber? Off the ferry we pulled over and waited until everyone else was off and gone so we wouldn’t hold anyone up, and away we went. It was a nice and uneventful drive to the van park, even though it’s narrow and windy, we didn’t really come across any large vehicles the whole trip and most people are pretty patient whether they’re stuck behind or coming the other way and we are taking up most of the road on a narrow corner.

The Daintree Rainforest Village is a great spot to camp with reasonable rates and the kids just loved the swings on the side of the hills. I could push Lucah as high as I possibly could and he’d just keep yelling to go higher and higher. In the three days we went to the Discovery centre, did as many walks as we could, board walks through swamps and rainforests, walks up isolated beaches, sunsets at Thornton and Myall beaches.  The Discovery centre was great for the kids with heaps of info on the rainforest, we went up the 23m high canopy tower, and even had a few dinosaurs that made noise and moved around to impress Lucah.  At Myall beach Loz took photos of the sunset and I walked so far up the beach with the kids that she got nervous as it got dark before we got back.  Pretty amazing with no one else around.  Walking back through the rainforest to the car Jaiden tried to scare the little kids about ghosts and swamp monsters. Funniest part is that he got scared and Lucah kept going, and going, and going trying to scare Jaiden more, until Jaiden got pretty frustrated with him.

When we first arrived at the village, the camp owner had told us to pack up on the morning we were going up the Bloomfield and tow the van to the yard at the top, but the day before we left, he came past and let us know we could leave the van where it was as they were getting pretty quiet. For the small fee to leave it there we were pretty happy we didn’t even have to move it. It also made it convenient for when we got back… But there’s more to that later on. So, we put some bits and pieces into the cruiser, locked the van and headed north past Emmagen Creek and onto the Bloomfield Track. The camp owner had already mentioned it was pretty corrugated and to air down so I took them straight down to 30psi and it was an easy drive.

The drive is just beautiful. Up and down several ranges through the oldest rainforest in the world is pretty special. It’s steep, but the steepest parts that I think are around 31% are concrete and the creeks were really low being the end of October. It was a pretty uneventful drive to Wujal Wujal falls, then onto Archer point just out of Cooktown. Archer point was on the list of places to go as we had met some people in Ingham who had found a Nautilus shell on the beach there so we were keen to see if we could find one. However, the first thing we found was the litter! The ocean seems to funnel litter to these beaches and just fill it up. They have an annual clean up, but it’s just crazy and sad how much washes up. Thongs, bottle caps, bottles and an assortment of plastics right along the shoreline of each bay that face east. Amongst them we managed to find three Nautilus shells, and agreed to come on our way back and get rid of some rubbish. We also had our first issue from the corrugations and had some plastic trim loose on the cruiser that we had to pull off.  Later on I worked out I should have kept it and worked out a way to re-attach it, as Toyota wanted $250 for the one piece!

We went on to Cooktown just in time to check in, go get some hot chips and sit up on Grassy Hill as the sun went down for another spectacular sunset. Cooktown is beautiful little town full of history. The two days flew past, seeing the museum, lunch and a walk through the botanic gardens and seeing some of the sights.  The museum has some great history not only on Captain Cook, but also WWII, Indigenous history and Chinese immigrants looking for gold.

We also had a quick trip to the hardware shop for a rubbish claw and thick bin bags. Heading back to Cape Trib we planned on not leaving Trethavan Falls later than 3.30pm so we wouldn’t be back along the Bloomfield Track in the dark. But before the falls we wanted to get back to Archer Point. The amount of rubbish we took away was hardly noticeable, but 3 big bags is better than doing nothing. Asher was by far the keenest, refusing to let anyone else use the claw. We ended up hanging out at beach for 5 hours, got sunburnt and explored the whole area. We still got a quick trip into Trethavan Falls (no swim, bit tricky for little kids getting into the water), then to the Lions Den for dinner. What a great choice for dinner as their meals are awesome pub meals and surprisingly busy for a Sunday night out in the sticks.

But… this meant a night trip through the Bloomfield Track. Only 10 minutes out from the Lions Den and Loz was already getting nervous at the idea. After the trip north on the Bloomfield I hadn’t quite aired back up to highway pressures so thought mid 30s in the tyres should be fine. The corrugations were substantially more noticeable, but in the rush to get back we chose to not air down further. We only passed one other car between Wujal Wujal and Donovan range.

We slowly crawled down the steep range in first low, then we got to the bottom the cruiser sounded like it was in excruciating pain. Torch out, bonnet up and enter issue #2. The air con clutch fell off after the bolt had vibrated so much it fell right out (turns out it’s a common issue on the 100 series cruisers). Luckily the front of the clutch had just fallen forward onto the fan causing the horrid noise. Lost the shims and bolt, but managed to save the clutch after shutting off the engine. My short-term torch bearer decided she wasn’t keen on being in the dark so with a barrage of nervous questions on how long we would be stuck there, got back into the car to play candy crush. The tyres were then let down to 28psi for an uneventful second half of the track, passing just 1 car the rest of the way. This was followed by a good sleep in the next day, and booking one more night to relax in the Daintree before heading back across on the ferry.

It was only the morning we were leaving I put it together that the tides made a difference for the ferry. I’d been pondering the trip back out with the van on, thinking of the narrow drive back and boarding the ferry that I clicked that at high tide it’d be an almost even drive between the ferry and the ramps. I’d actually taken note of the falling tide two days earlier at Archer point as it had allowed us to walk across the creek and over to a little bay on the other side, hardly getting our feet wet. I figured this made high tide around 10am two days later. Driving between Cape Trib and the ferry wasn’t too bad, just met a few cars on bends and had to stop for them to get past before I could get around, and held up a fair line of traffic idling down the range looking for a long enough spot to pull over and let everyone past. I’ve got to say, I was pretty happy to see a full tide when we got to the Daintree river.  Getting on and off was easy as.

After the initial resistance to go up, I’m so very glad we did in the end. It was one of the best weeks we have had so far.  I’m not sure we would go again (but I have started thinking about incorporating the CREB track into a Cape York trip), but it’s somewhere that needs to be on the bucket list. Pristine beaches and rainforests, an array of different animals and some easy but fun 4x4ing through reasonably remote rainforest.